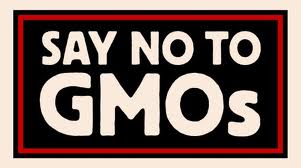 If you follow my blog or my face-book page you already know what GMOs are, but here is the basic definition -Genetically modified foods (GM foods, or bio-tech foods) are foods derived from genetically modified organisms (GMOs), such as genetically modified crops or genetically modified fish. GMOs have had specific changes introduced into their DNA by genetic engineering techniques. These techniques are much more precise than mutation breeding where an organism is exposed to radiation or chemicals to create a non-specific but stable change. The scientist at Monsanto started inserting genes from bacteria and viruses into crops. That’s were they got a crop that could either survive a application of the company’s herbicide glyphosate (roundup) or produce its own insect killing pesticide. Coming soon the USDA will be approving Agent Orange resistant crops (this have been proven in studies after Vietnam to cause cancer and birth defects).

Research has shown lower levels of nutrients in crops sprayed with Roundup. These crops are specifically engineered to tolerate the herbicide Roundup, whose use has increased with the release of Roundup-Ready GM crops. Glyphosate, the active ingredient in Roundup, decreases nutrient availability and uptake in plants. Some of these nutrients help plants and animals fight disease. Recent studies have shown a link between high rates of spontaneous abortions and infertility in livestock fed GM Roundup-Ready crops.

We know very little about the effects of genetically modified organisms on livestock and human health. Researchers in Italy have performed a study on some of the effects, and their results were released last year. They fed one group of pregnant goats rations with non-GM soybean meal and another group with GM Round up sprayed soybean meal. The mothers received this diet for two months prior to the birth of their kids. Then the offspring were fed milk only from their mother for 60 days. The results showed DNA from the GM Roundup-Ready soy in the blood, organs, and milk of goats. Also, the kids of the mothers fed GM soy had substantially higher levels of an enzyme, lactate dehydrogenase (LDH), in the heart, muscles, and kidneys. Similar metabolic changes have been found in studies of GM-fed rabbits and mice, as well.

The word is spreading that rabbits fed pellets from company’s that use GMO grown products in the manufacturing of their pellets are getting sicker. Laboratory GMO fed rabbits have had organ damage, reproductive failure, high death of kits, stomach legions, smaller bodies and organs, low immune responses, and higher death rates. There is no actual facts that I have, just resource’s and articles I have found.

The way a rabbits digestive system works is that the beneficial bacteria that needed in the gut must flourish and adapt to their food source. If this bacteria is off it will cause all kinds of digestive problems such as enteritis, bloating, wasting away and more! If the bad bacteria starts flourishing this can cause coccidiosis and other problems. Last year I have had a rash of emails, phone calls, people stopping by the rabbitry to ask questions about problems with their rabbits. The only common factor in all these cases is the use of GMO pellets. Not just in one area (from California to Maine) or season (Spring to winter)! I do not believe that they are stress related. I am lucky to feed the lowest amount of pellets I have too, to keep my rabbits productive and healthy. By feeding rabbits a more natural diet and keeping a closed herd, has been the best thing for me and my rabbits.

A result in tests done on rabbits fed gmo soy-meal was released found Roundup Ready Soy Changed Cell Metabolism in Rabbit Organs, Rabbits fed GM soy for about 40 days showed significant differences in the amounts of certain enzymes in their kidneys, hearts and livers. A rise in LDH1 levels in all three organs suggests an increase in cellular metabolism. Changes in other enzymes point to other alterations in the organs. When cells are damaged in mammals, LDH levels are elevated. It is a key indicator of cancer, and LDH remains elevated after a heart attack. Increased LDH is associated with several other health disorders

A German farmer who had 65 cows die after he fed them genetically modified Bt corn has filed criminal charges against Syngenta, alleging that the company knew the corn could be lethal to livestock, and covered up deaths that occurred during one of their clinical feeding trials. Swiss bio-tech Syngenta committed a grave criminal offense by deliberately withholding the results of a feeding trial in which four cows died in two days. The deaths prompted the company to halt the test. No health problems or deaths were reported in the control group, which was not fed the genetically engineered Bt 176 corn.

Thousands of livestock deaths have also been reported across India, as a result of grazing on genetically engineered crops and feed.

Alfalfa is the number one forage crop in the United States. In January 2011 the USDA approved the release of genetically modified (GM) alfalfa, raising the prospect that some non-GM alfalfa will be contaminated by GM alfalfa by cross-pollination from bees (could this also be the health problem bees are having?). Soon the first cuttings of GM alfalfa will be harvested and fed to livestock and be in your rabbit pellets with the GMO soy products. I have been called a conspiracy theorists but is this a way to control the food supply. You will not be able to raise any animals without the use of GMOs. This is why I push the Natural diet for us and our rabbits! Please comment your thoughts and ideas!

Raising Meat Rabbits To Save The World! Join The Rabbit Revolution! Like Us On FACEBOOK! Selling Breeding Stock Pure and Hybrid Crosses. We are more than just a rabbitry we are a way of life!
View all posts by riseandshinerabbitry »