This is the earliest that we have been able to start digging and shipping comfrey to our customers. We have a 50 root cutting special for 50.00 with free shipping this will be a mix of large and small root cuttings. These usally run at 2.00 for small roots and 5.00 for large roots. We will run this special till the end of April. Will still send extras with our specials. email us with your comfrey needs riseandshinerabbitry@hotmail.com

We finally had a killing frost and our growing season is over. The comfrey beds are dormant for the winter. Hopefully we can help you in 2020 for your comfrey needs. Have a great winter 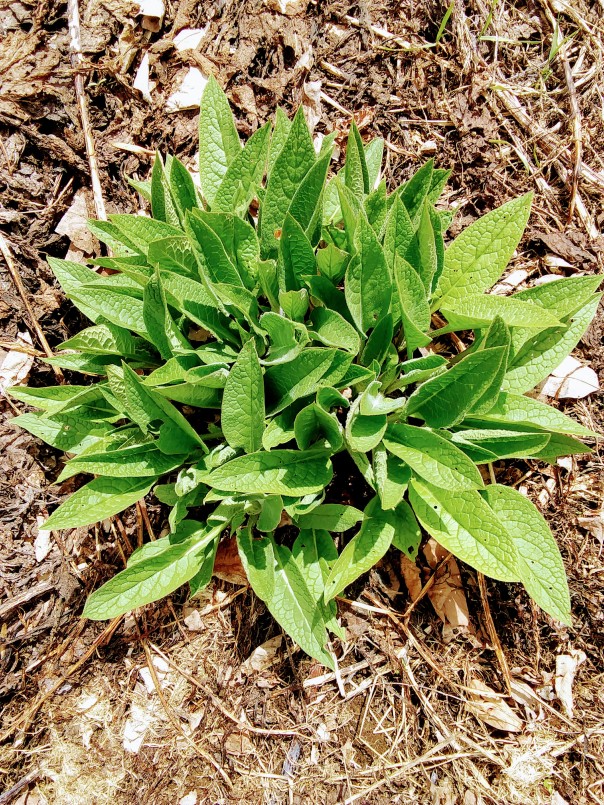 Finally all are preorders have been dug and shipped.

Our first orders are caught up have been dug and shipped.

We hope to help you with comfrey needs for the 2019 season. Just email us at riseandshinerabbitry@hotmail.com. We can send you a PayPal invoice or you can pay by mailing a check or money order.

May special 1.00 each for assorted small and large roots 20 minium, free shipping for 50 roots or more. Any question just shoot us a email.

The 2018 Comfrey season has begun!

It was a long winter here on the homestead, but finally all our comfrey beds are open and ready to dig.
We hope to help you with your comfrey needs for 2018. We sell roots, crowns and plants
We have been selling lots of roots to orchards owners to plant around their trees over the last few years. No order is to large! We offer deals on large orders and run specials during the season. Just email us for more information. riseandshinerabbitry@hotmail.com

Podcast were we talk a little about comfrey https://riseandshinerabbitry.com/2014/05/07/podcast-with-youcanhomestead-com/ 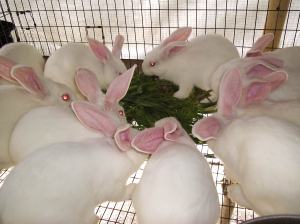 I raise my rabbits on wire in wire cages. The floor wire is 1″ x 1/2″ and sides are 1″x 2″. I have always had happy, healthy rabbits. I was ready to write up a post on raising rabbits on wire floors, but  Shiny Satins Rabbitry has a few great posts on this subject and I could not agree more with what they have written. So go and check it out!

I know this is controversial subject and some rabbit raisers will disagree with wire floors. I do feel that some breeds of rabbits would do better on slatted floors such as Rexes as they are known to have less fur on their hocks and more prone to sore hocks.

These links were shared with the permission of Shiny Satin Rabbitry

1   Baby rabbits are referred to as kits.

3  Female rabbits are referred to as does

5   Male rabbits are referred to as bucks

6   In the wild rabbits live in groups called warrens

9  Today’s domestic rabbit is descended from the European Rabbit

10 Rabbits do not vomit

13 Domestic rabbits are born without fur

16  Rabbit pelts have been used for many years as fur and in the manufacture of felt https://riseandshinerabbitry.com/2012/01/22/tanning-rabbit-pelts/

17 Rabbits can pick up diseases from their own droppings.

19  Rabbit shows are a good place to see a wide variety of rabbits https://riseandshinerabbitry.com/2012/10/21/what-breed-of-rabbit-to-raise-for-meat/

20  A small amount of Apple Cider Vinegar added to the rabbits drinking water will increase their appetite https://riseandshinerabbitry.com/2012/01/26/apple-cider-vinegar-for-rabbits/

23 There are over 150 recognized rabbit coat colors and varieties

25 Rabbit meat is lower in fat, cholesterol and calories than chicken, pork and beef https://riseandshinerabbitry.com/2012/04/06/10-reasons-why-you-should-eat-rabbit-meat/

26 Rabbits only sweat on the pads of their feet

35  The scientific name for the rabbit is Oryctolagus cuniculus

41  Some rabbits are raised specifically for their fur or fiber, such as Rex or Angora rabbits

42  A place were you keep your rabbits as a business or hobby is commonly called a rabbitry https://riseandshinerabbitry.com/2012/05/06/making-money-with-rabbits/

44  Millions of pounds of rabbit meat are consumed each and every year https://riseandshinerabbitry.com/2012/05/10/cooking-rabbit-hints-and-tricks/

47  Rabbits can see behind them, but they have blind spot in front of their face.

48  A group of rabbits is called a herd

50  Predators can literally scare a rabbit to death https://riseandshinerabbitry.com/2012/04/14/the-rabbits-senses/

RADIO IN THE RABBITRY

Spoil and keep your rabbits safe by giving them a radio!

Playing a radio in your rabbitry will benefit your rabbits by making them more accustomed to unusual sounds and less likely to panic and hurt themselves by running around the cage .

Rabbits being prey animals, are generally timid and easy to startle. A sudden kick with its hind legs or excited run around the cage is all it takes to snap the rabbit’s backbone and render it paralyzed. Because the rabbits will be used to other noises they will be less excitable and less stressed thus giving you more relaxed, happy, healthy rabbits.

I have a friend who raises fancy (expensive) chickens and always had a radio playing day and night to keep predators away. He never had a problem until one night his wife turned off the radio. The next day every one of his chickens was gone.

You will also enjoy the music when you are feeding, cleaning, grooming, and just hanging out with the rabbits.

At night I change the station to talk radio so predator’s and even humans may think someone is out in the rabbitry. Even a police scanner would work.

So let your rabbits jam out to your favorite tunes or mellow out with some classical background music.

MEDICINAL HERBS FOR RABBITS – With pictures 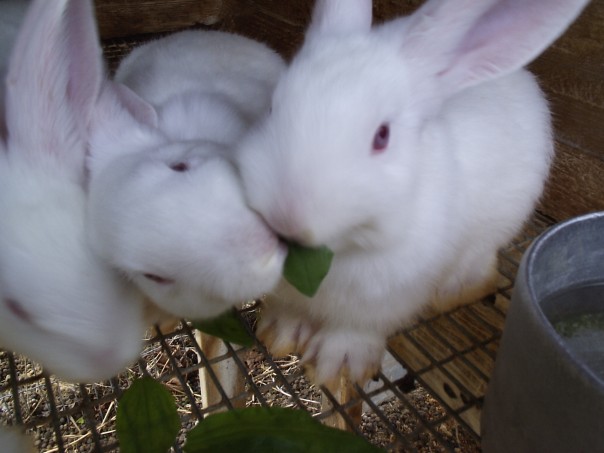 This is a copy of our older post but with pictures in a PDF format. Thanks, to Muril Stone for all the hard work! 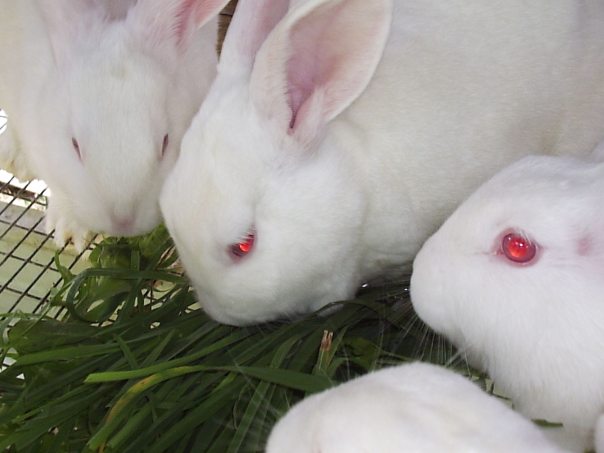 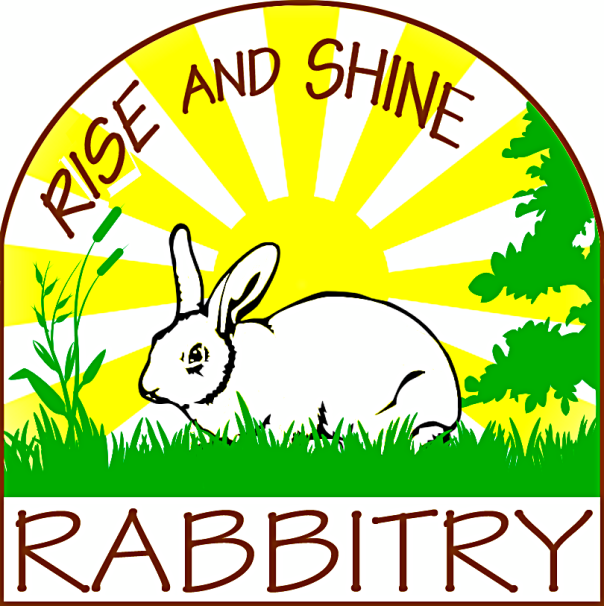 Here is a quick list of rabbit terminology you should know when raising rabbits.

I will be constantly adding to this list if you see something I missed please Email me riseandshinerabbitry@hotmail.com  and I will add it in.

Agouti- A color pattern where each individual hair alternates dark and light bands.

Belled ears- Ears that lop over or droop, this is sometimes caused in growing rabbits in hot weather.

Breed- Group of rabbits that share the same characteristic’s such as color, size, and fur type

Breeding- When you mate rabbits.

Coccidiosis- Coccidiosis is considered to be the most common disease in rabbits and is very hard to cure.   Coccidiosis is caused by a protozoan. There are nine species of this protozoa that can affect rabbits, only one affects the liver, while the other 8 affect the intestines. It seems that younger rabbits have a higher risk for this disease. The disease is spread as the eggs from the protozoa are shed in the rabbit feces, which is then transmitted to other rabbits.

Condition- the general health and appearance of a rabbit.

Colony raising- This system of management is the raising of multiple rabbits together in one area inside or outside.

Culling- Culling is not just the killing of rabbits, but  with that being said you do not want to breed or sell to potential breeders, bad rabbits these are to sold as pets only. Save The Best Eat The Rest!

Dam-The mother of a particular rabbit.

Dewlap- Fold of loose skin under the chin of female rabbits.

Dressed- Skinned and prepared for cooking.

Enteritis- Is a Intestinal disturbance in domestic rabbits this is caused by stress and or other underlying diseases.

Gestation period- The period of time between breeding and kindling. Usually 28 to 31 days.

Hock-First joint of the hind leg of the rabbit.

Jacket off – this means the rabbit will be skinned

Kits- A bunch of bunnies.

Kindling- when the doe is giving birth to young.

Litter- group of baby rabbits born in one birth

Line breeding- this breeding system is usually the most satisfactory. Line breeding itself is a form of inbreeding, but is less intense. In line breeding, rabbits are mated together which are both descendants from a particular rabbit, but which are as distantly related as possible.

Malocclusion- The misalignment of teeth, this is genetic and rabbits that have this should not be bred.

Nest box-  A box to provided for the doe so that she can make a nest and have kits in.

Nesting- when the doe starts to put nesting material in her box.

Outcrossing- is the breeding of two rabbits from unrelated lines.

Palpate- Feeling for the developing embryos within the abdominal cavity of the pregnant doe. This is said to be the most reliable way to determine pregnancy in the domestic rabbits.

Pedigree- Written record of an animals ancestors, going back at least three generations.

Pelt- skin and fur of a rabbit to be tanned.

Purebred- parents are of the same breed

Rabbitry- placed were rabbits are kept

Sire- The father of a particular rabbit.

Sore hock- a ulcerated condition of the undersurface of the hind feet of a domestic rabbit. Cause by sparse hair on the hocks, this could be genetics or some breeds like rexes have this naturally. Dirty wet conditions.

Test breeding- At about two weeks following breeding, the doe is returned to the buck’s cage. If she is bred, she will whine, growl, and flatten herself against the cage floor. She will not be happy to the buck’s advances. This is often the case, but there are does who will breed if pregnant and those who will refuse the buck when they are not.

Trio- 2 does and 1 buck. They are usually matched for breeding to begin or expand a rabbitry.

Type- General physical make up of a rabbit.

Warren- Warrens are a large fenced enclosed area were rabbits can burrow and live as naturally as possible. This is equal to free ranging chickens.

Weaning- When you take young rabbits away from the mother and their transition to solid food.

Wool block- blockage in the digestive tract cause by fur